It’s a topically spooky Fadtastic Friday! Join me in explaining Fad Number 3: A journey to Wicca.

All I wanted to be was a witch, with cool powers and amazingly long dark hair that flowed over my velvet clad shoulders as I strutted around my cauldron. Witches were beautiful, alluring, intriguing and although I didn’t have a ‘Scooby’ what at least two of those words meant, I knew I had found my calling in life. I was six. 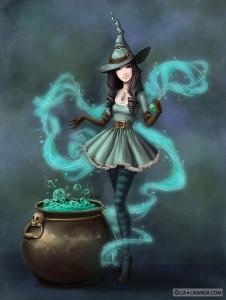 From this very early age, I developed a love of all things mysterious and mythical. I would lap up watching anything with a connection to the supernatural, whether it be bloodsucking day walkers or covens of high witches. From Grotbags to Buffy, Sabrina to Ghost Whisperer, if it involved spells and magical creatures, I was on it!

I was a huge fan of Samantha in Bewitched and would spend hours perfecting my nose wiggle, desperately wanting something to move at my command. I read all the Jill Murphy ‘Worst Witch‘ series, longing to attend a boarding school that I could have magical adventures in. Of course, the reality was very different. When my mum took me for a look around one, I discovered there were no magic brooms, no cute familiars ready to curl around my legs and I was actually terrified of the dark corridors. She wasn’t too enamoured with the nuns either. But that’s for another story…

At eight years old I made a Ouija board for a school project. I lovingly stained a piece of wood in a dark varnish, using a matching wooden eggcup for a makeshift  planchette, inscribing golden letters around the outside in my best calligraphic hand. Everyone wanted a go, trying to call up the dead – we believed it was just harmless, scary fun.

That was until one girl, seemingly more worldly than the rest of us, gave us nightmares for at least two months by declaring we’d all be possessed by the devil, as we were on the verge of puberty and the smell of new blood would be enough to have our souls destroyed! Talk about petrified! If I’d been a little older (like twenty years older!), I’d have told her to dial it down a notch and do one! But I was a timid little thing so we packed away the board, hoping whatever this ‘Puberty’ was it would come and go without us having to fight any dark forces.

However, my interest still remained and resurfaced again in my mid-teens. Presented with a book as a leaving gift from our headteacher, I opted for an encyclopedia of Mind, Magic and Mysteries. For hours I’d pore over every detail describing ancient magical rites and arts such as the Tarot. I needed to know everything! And then I discovered the Halliwell sisters… 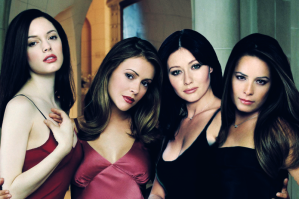 Prue, Piper, Phoebe and Paige – the magical siblings of Charmed. I wanted, no needed to live in their attic and have my own Book of Shadows. So when I found out I could actually study witchcraft, I was ecstatic!

At the time, my then boyfriend’s father told many a tale about studying the occult and being a former member of the Rosicrucians. Stories of his alter, locked away in a private room, of calling up spirits and conversing with other realms. Did I believe him? I definitely wanted to. I was fascinated and lapped up any information – despite him being purposely vague (there were strict rules, naturally!)

However, it all seemed a bit dodgy and a little too close to the dark side for my liking. I wasn’t really up for selling my soul, instead wanting to be a champion of nature, some wood nymph guardian of all forests…or something to that effect. So, keen to emphasise to anyone who would listen that I was a GOOD witch (but let’s face it, if you say you study witchcraft, it’s going to be slim pickings on those taking notice), I skimmed around the edges of this religion (yes, it’s a recognised Pagan faith) and tried to put the world to rights with magical herb-lore.

Want a good night’s sleep? I’d have a spell for that! Getting the heebie jeebies and convinced you have bad karma floating around your aura? Let me read your colours and encircle you in salt… Pentagrams and crystals or scrying into a mirror at midnight. Referring to my cat as being ‘half in, half out’ the shadow plane and talking to the moon were all part of my life.

But I was rubbish. The worst witch that ever was. Why? Because like any religion or movement, people need to be dedicated to the cause. There were rules to follow and I’ve never been very good doing as I’m told! Cleanse my crystal ball in the light of the new moon? Bit chilly isn’t it…let’s do it next month. Spell needing the spit of a two year old and half a locket of red hair? Maybe it will suffice to just chuck in the contents of my hairbrush…

And it should have been clear to anyone that I wasn’t a real practicing Wicca. Not only was there not a coven in sight but I would insist on everyone calling Halloween ‘Samhain’. Except I pronounced it SAM-HAIN and all Gaelic speakers shook their heads in disappointment. 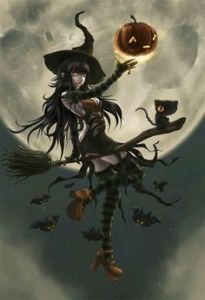 It was time to come to my senses by packing away the imaginary cauldron (see, I didn’t even have the correct kit!), exorcise the fad demons and leave the Wiccan worship to those who had more commitment and took their faith seriously. So mote it be… I went back to my TV witches, dreaming of simple powers. You know, like levitating the biscuit tin closer to my hand. 😉

I still worry about portals to the other side though. I really should cover that mirror on the stairs…