A small army at least.

But I’ve no idea who Dan is.

Okay, it was a terrible play on words. Shall we move on?

So, remember when I made my own toffee chunk ice-cream? Well, I had (and still have) plenty of the toffee left so decided to put some to use in a batch of cookies.

The basic recipe is a tried and tested favourite that produces soft, ever-so-slightly chewy cookies. None of that brittle nonsense.

Adding the toffee gave an extra dimension of gooey loveliness – the chunks melt in the dough as it’s cooked and ooze with wanton abandon. Plus, using brown sugar helps to enhance the caramel flavours. 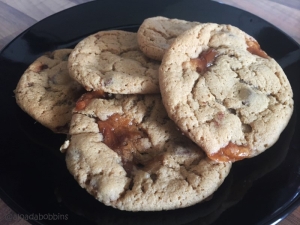 However, as yummy as these cookies are, I didn’t want to bake an entire batch (that should yield approx 18) at once. So I decided to investigate the ‘frozen cookie sausage’.

END_OF_DOCUMENT_TOKEN_TO_BE_REPLACED

If there’s one treat that immediately says ‘summer is here’ it’s ice-cream. Everyone loves a scoop or two, whether it’s waffled coned, in a dish or a good old ’99’ with a flake in it. Don’t they?

Well, I’m one of those who isn’t that fussed by its sweet creamy goodness – maybe I just have over sensitive gnashers! For me, it’s more of an accompaniment to a pudding, rather than a stand-alone dessert. But when the sun finally puts its hat on, I do indulge now and again.

So when we went wandering in York over the weekend, ice-cream was on the agenda. But I came over all pretentious, wanting something more artisan than a typical Mr. Whippy, and ended up getting none. Probably serves me right…

‘Make some, that what I’ll do!’ I thought. And that’s what I’ve done for Monday Munchies this week. I’ve seen loads of recipes for No-Churn varieties and they looked super easy and didn’t need an ice-cream maker. Which is handy as I don’t have one.

END_OF_DOCUMENT_TOKEN_TO_BE_REPLACED

Seeing as it’s the start of Wimbledon (and I’ve gained quite a few new followers recently, thank you!) I thought I’d re-share the recipe that still makes me feel the most accomplished for this week’s Monday Munchies: As an added bonus, you get to see me with a strawberry for a nose!

I’m terrible for having sudden whims and fancies that I like to put into immediate action, usually much to the annoyance of S. Friday saw such an event as we were on a drive to a sporting final out in the country and I suddenly spotted a ‘Pick Your Own‘ strawberry patch.

A big grin signalled that yes, I would like to detour into said field right this minute! Despite the audible sigh, S obliged and abruptly turned into the parking area. Of course, it couldn’t be that simple could it? We had no change on us (I’m also awful for only ever carrying plastic) and this field was clearly living in the Dark Ages and had no power supply for a cash machine 😉 However, after a bit of back and forth to a local garage, we had money and a basket and off we went.

I was loving it! Just the smell alone was wonderful, but there’s something very calming about pottering around a field and foraging. After about 40 minutes, we had around a kilo of strawberries (some right hefty specimens too!) of differing varieties for a bargain price.

I do like strawberries but they’re not something I buy generally as they usually get wasted. So having a kilo to use up because of my impromptu madness meant I needed to find some suitable recipes. I’ve been seeing a lot of Eton Mess recipes recently (they always seem to be rolled out as a summer staple) and a few for a cheesecake variation were looking enticing! Cheesecake at one point was my ‘go to’ dessert when out for a meal, though I think I over did the consumption and my appetite for it was lost. However, I’ve recently become reacquainted with its creamy loveliness, so announced to S that this is what he could expect as dessert when he got home…

END_OF_DOCUMENT_TOKEN_TO_BE_REPLACED

As the British sunshine mustered up enough courage to break through the clouds for more than four hours this past weekend, it seemed the world and his wife were dusting off the old BBQs (including us!) So I thought I’d reshare this tasty, meaty recipe post, great for a BBQ gathering but equally as delicious for a weekday meal. I hope you enjoy and remember, ‘n’er cast a clout ’til May is out‘ – in other words, it might snow next week… 🙂

It’s Monday Munchies which means recipe o’ clock 🙂 But I thought I’d branch out this week and share something other than baking. As much as my first love will always be cakes and sweet treats, apparently we have to eat other stuff too! ‘Boo and hiss’ I hear you cry, but unfortunately carrot cake does not constitute one of your 5-a-day!

However, I’m not going for greens today, more of a protein angle. Despite me trying to encourage Sam to consume more vegetables by cleverly disguising them in exciting dishes (he is an adult, honest!), his inner neanderthal never feels completely satisfied unless he’s gnawed on flesh.

So here are two meat dishes (both easy, one quick) that can be rustled up for a tasty weekday meal or used to impress friends at that weekend BBQ you promised to bring something along to! I hope you enjoy them, they got the thumbs up for a re-cook from Sam, so they can’t be too bad!

END_OF_DOCUMENT_TOKEN_TO_BE_REPLACED

Monday Munchies nearly became a disaster I gave up on this week. It was early Sunday morning, so my excuse is that I wasn’t fully functioning. It sounds better than admitting I’m useless and don’t bother to pay attention to things! You see, it wasn’t until I got a little whiff of something yeasty, that I realised the flour I’d used for a traditional cupcake was actually a ciabatta bread mix! That could have been interesting…

Starting again, I was intent on creating something that still fit with the month of Halloween. I’ve always been good at making butterfly buns, being my go-to cupcake bake since I was old enough to cream butter and sugar, but delicate little insects aren’t very sinister are they? So, I decided I’d rename them BAT-erfly buns. Tenuous? Yep…plus I’m all about cheesy word play!

Unfortunately, I was foiled again when the chocolate buns came out the oven – they had risen a little too much, which meant they were not going to be very helpful when it came to making bat wings. I’m sure if I was better at decorating bakes, or could make some sugar-crafty awesomeness, I could have persevered. But I’m not and I didn’t. So the compromise was… 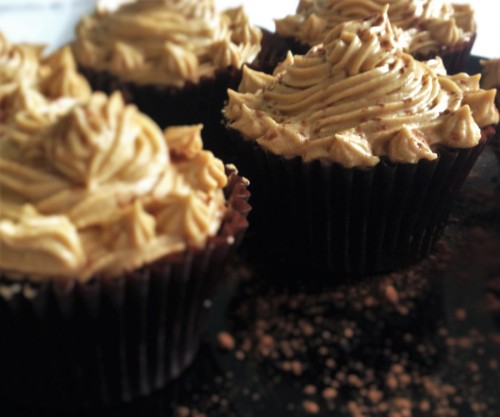 Yeah, I’m not great with a piping bag, but hey-ho…they taste wonderful!