It could have happened. We’ll skip over the fact that I’ve never found him attractive. But had there been a different set of circumstances, a different alignment of the stars, I feel there’s every chance I could have wound up being a Mrs. Take That.

Why? Was I some supermodel in my youth? A socialite, frequenting star-studded parties, only to fall on hard times in later life? Well, no. But it could have happened!

The Nineties. A decade that brought the first round of Pokemon, Rave culture, Brit Pop, DVDs and of course, the Internet. It also happened to be when I was finishing high school.

Now, I wasn’t really a ‘conventional teenager’. Not cool enough to be one of the seriously popular girls, smoking behind the bike sheds and not quite weird enough (although now I’d say ‘still not cool enough’) to mix with the grunge-scene, alternative kids.

Nope, I was mainstream average, borderline boring and still really in the mind of a ten year old. Except when it came to my grades, where I excelled. I was good at school, good at home, never rebelled and earned the title of being a straight-up swot.

However, this had its advantages, being chosen to represent the school in different ways. None of which would have made the mean girls jealous – they were more interested in which party they were attending that night and how they could get their hands on more White Lightening.

At least that was the case until the day we were told Take That were coming to perform at our school! This was early days for them, just starting to become popular and adorning the covers of Smash Hits and Just Seventeen. 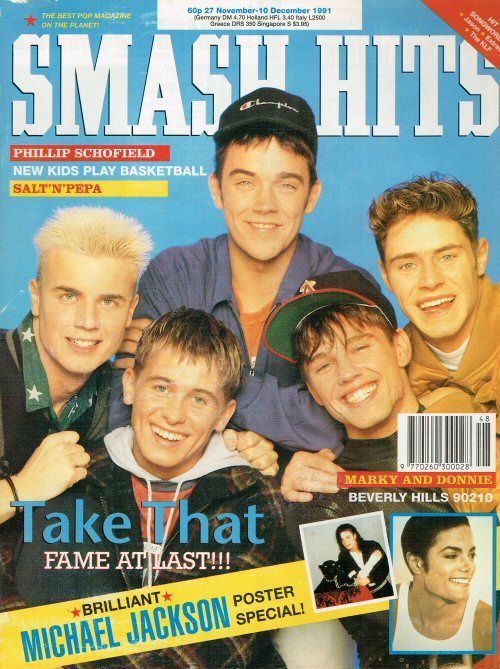 I’ve never really understood the hysteria surrounding pop stars. I went through a slight phase, having a crush on Morten Harket from A-Ha and did enjoy looking at the face of Joey McIntyre from New Kids on the Block. But aside from this, I was more into my films, TV shows and fantasy stories. I had crushes on cartoon characters for goodness sake! 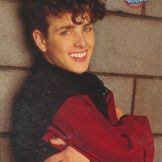 So, I didn’t think much (at first) about being one of a group chosen to interview the fab five. We would get a chance to meet them and ask questions, before they performed in the afternoon to the school. I was great at asking questions, I was confident around adults and could write well, so it all seemed like a plan.

Except, these celebs weren’t exactly adults. Not in my head. They were teenagers, like me. Albeit leather-pant wearing, shirtless and gyrating teenagers. But still…only a few years older than myself.

And I did harbour a secret crush on Mark Owen. Little Mark, the baby of the group – I would be close enough to touch him! I could see his dazzling smile up close, have my photo taken with him! The excitement started to bubble as quickly as the panic…

Some of my friends, who were also chosen, started musing over whether they’d get to kiss them. They began planning elaborate ways to declare their love to each member of the band and started talking of going to the concert at the local nightclub, where Take That would also play.

They even mentioned alcohol and cigarettes…

Well, that was it. The panic spilled over and before any more fuel could be added to this hormonal fire, I bailed.

I was terrified of what would be expected once I was in a room with these oiled-up sex machines! I’d never properly kissed a boy at this stage, let alone dared to take a swig from a bottle of anything stronger than milk. I mean, what if they spontaneously took their shirts off, mid-interview??

My boring side kicked in and I feigned an illness, running home at lunchtime, where I probably sobbed over the ripped-out page from Smash Hits with Mark’s face on it. I didn’t go back until the next day, completely missing the whole shebang!

So why am I writing about this now? Well, 26 years on and numerous hits, awards, scandals and members leaving and returning, there is a stage show: The Band chronicles their fame and celebrates their music. And it’s currently playing at our theatre.

I didn’t have tickets, didn’t even know about it if I’m honest, but then I kept catching snippets of news about the real Take That performing secretly in the city.

And that’s just what they did – turning up on stage amidst the tribute act to the delight and complete surprise of the audience. Social media went into a frenzy and the local press, fed up of reporting on Snow Watch, focussed their attention on nostalgia and printed pictures of Take That visiting our school all those years ago.

That’s what I woke up to today – a montage of photos, many including friends, hugging and smiling inanely as a sea of Nineties perms danced along to the oily, sweaty, thrusting moves of Gary, Mark, Robbie, Howard and Donald. Great…

“Can you imagine if that happened in a school these days? There’d be an outcry,” was Sam’s response. I guess it was more Magic Mike than wholesome musical education!

Quite why I thought any one of them would want to choose my barnet of frizz out of the plethora of adoring girls on offer, is a mystery. Perhaps I thought I could charm them with my exemplary knowledge of trigonometry…

But it could have been me. If only I’d been brave enough.

P.S. If you’re interested, this late bloomer had the guts to go to her first nightclub aged 17. It was an over 21s night…and I got in. And then it began… 😉

P.P.S It’s totally all about Gary these days. Absolutely brilliant!

13 thoughts on “I could have married Robbie Williams…”