No, this isn’t a post about chess – although I can set up the board in the correct order, know a couple of terms and that the knight moves in an ‘L’ shape, I’ve never learned to play. It requires more effort and brain power than you all know I’m capable of!

Instead, this post is about my encounters with clergy last week, when our school had a visit from a VIP. We’ve been waiting for his holy presence for some time – it was arranged, then cancelled due to having some more ecclesiastical duties to perform. 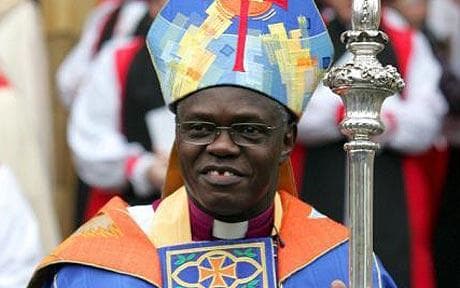 But eventually, the day came for us to entertain Dr. John Sentamu – who is no ordinary bishop but the Archbishop of York. Second in command to the Canterbury chap and a very important person!

I’ll start off the tale by pointing out that I do not follow a faith. Religion interests me, I pray… and that tends to be (in my head) to an older, beardy bloke that most people would recognise as a Christian god. And I wear a St. Christopher. Because it belonged to my Nana. But as far as organised religion goes, I don’t partake.

Our school isn’t a designated faith school either – it follows a mainly Christian syllabus when it comes to assemblies and the local vicar comes in fairly frequently (to read his sermons from his iPhone!) but all faiths are covered in R.E. and this is about as far as it goes. A far cry from when I worked in a Catholic school and we attended Mass everyday, after several Hail Mary’s recited at registration.

Anyway, I digress. So, Archbishop Sentamu decided to pop in as he is apparently working his way around all the schools in the region, I guess to make himself more accessible to the youth sector.

We knew he’d be doing a walk-around, taking our assembly and was open to questions from the children. We all just had to act normal… 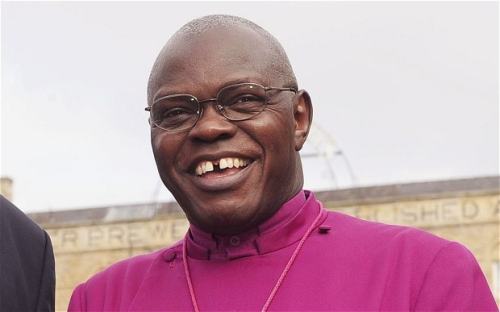 When he arrived, I spotted him in the Head’s office and I have to say, I was a little disappointed. Wearing a simple purple jumper and trousers, he didn’t look at all official. In fact, his chauffeur looked more the part. At least he was wearing a dog collar!

I carried on with my jobs, not really thinking more on the matter. That was until, as I was sending a child back to class after their play therapy, I heard voices down the corridor…

“Let me introduce you to our Behaviour and Well-being  support…”

Oh bugger, that’s me. Our head teacher’s voice was getting closer and I quickly searched my brain for something intelligent to say to describe my job, panic starting to surface in a similar fashion to if an Ofsted Inspector had just materialised out of the ether.

I spun around with a smile, as the head introduced him as the Archbishop, which was kind of obvious as out of the three people in front of me, he was the one wearing a long purple cloak with an elaborate cross on the front. Still no pointy hat, but at least he’d made more of an effort!

“Hello, pleased to meet you,” I gushed. The Archbishop simply nodded. And then stood there, staring at me quite intently. It was really very unnerving, not helped by the fact that everyone was silent. Stale mate…

What to do? How could I break this uncomfortable silence? Ask him if he’d heard any good prayers lately? Or whether he knows when Jesus will be back?

Obviously, neither would be appropriate or respectful, so I went with the tried and tested route, that I was always taught to use when meeting someone new – I thrust out my hand to shake his.

What happened next, seemed to occur in slow motion. At first, I was left hanging, but then slowly, his hand moved out from beneath his robe and edged towards mine, before finally…

Waggling my index finger a bit.

My brain went into overdrive, which hopefully didn’t register on my face. Did I do something wrong? Was he like the Queen and not supposed to shake hands? Should I have bowed / curtsied? Had I just committed a sin?

I tried to remember any tidbits of information I had about greeting clergy (making that sound like I have a specific, more-than-one-entry, area for it in my head), and I kid you not, I had the wild notion that I should have licked him…

Babbling about my role and how I support children with a range of issues, to help their mental health, I tried to brush over the awkward interchange and was pleased when the Archbishop’s assistant asked some questions. I was thanked for the work I did to help and then they all moved on.

At lunch, I frantically asked other staff if they had shaken his hand (they hadn’t) before bemoaning to our head that he should have given us etiquette lessons first! Everyone seemed to find it quite funny…

But how does one greet an Archbishop? I feel this should have been a question for James Proclaims and his fairly new section of James Explains. However, I didn’t have time to wait and see if I was going to be struck down by lightening for a huge faux-pas, so I did a Google. 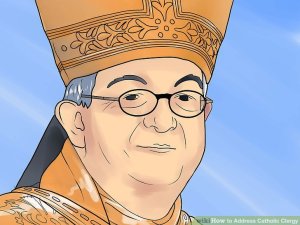 And this is what it told me…

Address an Archbishop. During a formal introduction, an Archbishop should be introduced in the same way listed above for a Bishop. However, in some parts of Canada, especially in the West, it is common practice to address an Archbishop as “His Grace”. In this case, during a formal introduction, an Archbishop could be introduced as “His Grace, (First and Last Name), Archbishop of (Location).” He could be directly addressed as “Your Grace” or “Archbishop (Last Name),” – or, on paper, as “His Grace, The Most Reverend (First Name and Last Name), Archbishop of (Location)”. Note that, as with a Bishop, you should stand when he enters a room (until he invites you to sit) and again when he leaves it. Remove your hat in his presence, and you may kiss the sacred ring during both the greeting and the closing. If he is your own Archbishop, you may kneel when kissing the ring (though bowing at the waist is also acceptable); however, do not do either if the Pope is present.

Except, I didn’t because…that’s for a Catholic Archbishop and Dr. Sentamu is Anglican.

Oh my word, it could have been SO. MUCH. WORSE.

In the end, I didn’t feel too bad about my actions. I went on to hear him talk to the school in assembly (we’ll quickly skim over the child who said he thought Nelson Mandela was “that man in the White House before Trump”) and put it down to experience.

And seeing as he talked to some of our youngest children about the merits of using dark ale, rather than light ale to make a good pork crackling, I doubt I have much to worry about!

Have you ever had to meet a very important person and completely messed up? Let me know in the comments!

8 thoughts on “Stale Mate with a Bishop”