In few hours time, darkness will fall across the United States, plunging many into panic and others into exultant displays of worship.

Of course, there are those that would argue this happened back in January and the Apocalyptic parasites have been slowly devouring the land ever since. Yet, I refer not to the mere mortals that consider themselves gods, but to the true celestial powerhouse; the Sun!

It’s eclipse time everyone! The last time the US had a total eclipse (singing it Bonnie Tyler style is obligatory…), I was only 2 years old. But today, they are going to have such a wide stretch of dark totality – having seen a couple, it still ranks as one of the most surreal experiences of my life. Shame I couldn’t afford a plane ticket…

Back in 1999, having just passed my driving test, I opted to drive to the opposite end of the country to witness my first, full solar eclipse. I’ve always been interested in the movements of the planets, stars, clouds and other skywards objects, and I’ve watched several lunar eclipses over the years. So the chance to experience sudden darkness was too good to miss.

Some would say driving 9 hours for the first time on motorways and sleeping in a service station car-park was a little over the top for two minutes of what could be achieved by sitting in the cupboard under the stairs, but…whatevs!

Armed with some pack-up, a reluctant friend and a mobile phone that was big enough to house the carrier pigeons that surely made it work, I set off to Cornwall.

In danger of running out of time, we actually managed to see it from the top of a hill, on the Isle of Portland, in South Dorset (which I guess is quite fitting seeing as Portland, Oregon will be one of the first places to see today’s display!).

Arriving as the moon was beginning to take a chunk out the sun, we dumped the car and legged it to a grassy spot, among hundreds of others (some half naked and performing ritualistic dances, others admirably drunk for the mid-morning hour…)

And when all went dark… well it was THE BEST! Honestly like a switch being flipped, not only on light but sound too. The birds stopped singing, the crowd held their breath, the street lights could be seen across the bay coming on spontaneously. Once the moon passed and sunbeams filtered out again, a cheer went up and everyone was euphoric.

And then Paul Daniels (a very well-known TV magician and household name in the UK), headbutted my car bonnet as he filmed the sky with his camcorder that was almost as big as him. And we were on TV news.

Then two years ago, still buzzing with memories of ’99, I convinced the school I worked at that we should be getting everyone out there to see this rare phenomena, despite this time not being able to experience a full show. 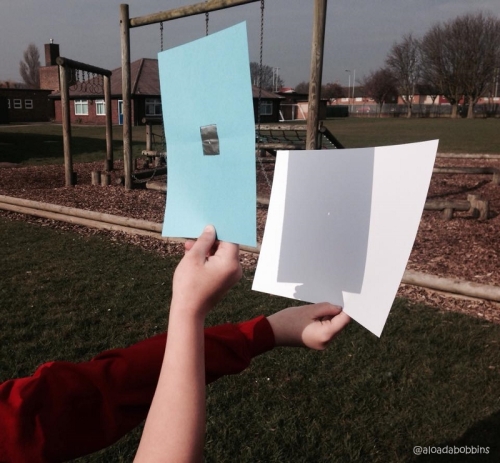 We made pinhole viewers to keep the kids’ eyes safe and stood out in the school grounds en masse. Although we had a lot of cloud, it was still a great event and the children loved it, sparking an interest in the the cosmos that fuelled discussion for weeks!

The universe is a fabulous place and casting your eyes upwards, even if only once in a  while, is humbling and uplifting. So do it – but remember not look directly at the sun!

Whatever else is happening in the world, the sun will continue to rise and the Earth will continue to spin – if you’re watching today, stay safe, have fun and enjoy celebrating the cosmically epic display. I’m only the slightest bit envious!

IMAGE CREDITS: All my own so please ask before sharing! 🙂

24 thoughts on “Heavens Above!”