Riddles and Puzzles. Ciphers and cryptograms. Mysteries and folklore.

I fancy myself as being quite good at working them out but in reality, I’d be kicked out of any lectures by Robert Langdon before even being allowed through the door!

But my lack of expertise doesn’t stop me wanting to conquer a coded challenge so when a local mystery began to unfold a few weeks ago, I was eager to get cracking.

It all started with a small news story, that gained momentum on social media, of some mysterious, ancient looking crates found in abandoned tunnels under The Land of Green Ginger.

Now, despite having a particularly magical (and therefore fictional) sounding name, this place does exist within my home town of Hull. A small street in the city centre, it is often attributed with housing the world’s smallest window, within the George Hotel. 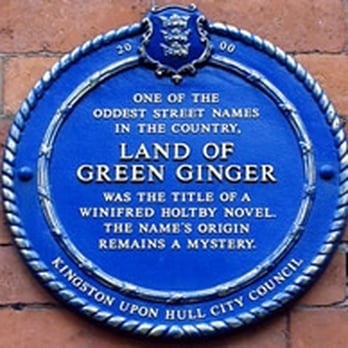 The tunnels, among many beneath the city streets, were once possibly used for smuggling, as much of the now paved centre was originally the docks, and some were reportedly used by monks to move items from their monasteries. So, a discovery of this nature was not completely unusual but was nevertheless exciting.

Some national news outlets ran the story, detailing that the crates, which carried a stamped message ‘To Hull, from Land of Green Ginger’, had been passed over to archaeologists for further investigation. It was all very intriguing.

And then, from nowhere, a group calling themselves the Green Ginger Fellowship popped up and took over proceedings. Apparently an organisation running for 40 years, that investigates folklore and urban myths, it was made up of a mixed bunch, with skills in the fields of archeology and folklore.

Seemed genuine enough – I maybe hadn’t heard of them but it sounded like the group I used to be part of when I went ghost hunting. Some knowledge and a lot of enthusiasm to find the truth. Mulder would be so proud!

A website materialised for them, as did a Facebook page, and from here they posted regular updates about their findings. They took the plunge early on and decided to open a crate, which allegedly spewed out some green vapour. Well, it couldn’t be any other colour based on its original location…

And then, they ‘heard voices’ and what sounded like bells coming from inside one of the boxes. Oh, and a vase filled with sand and a strange note – all seemingly in pristine condition, without so much as a hint of dust. Hmmm…

Do I sound cynical yet?

Well, I was. Because as (*ahem*) a seasoned paranormal investigator 😉 , I doubted that anyone would uncover such fabulous evidence so conveniently and if they did, they wouldn’t be sharing it immediately with the world!

The note discovered had a riddle on it, which the public were invited to solve. So although I was getting increasingly frustrated by how gullible people were being with their comments online, I still wanted to solve the blighter!

It’s silver in partakes, out of control,
A double in challenge and alley and scroll,

This one is third along Holderness Road,
The most common letter in languages old,

The start of a homophone, talking, not beast,
Penultimate sun that will rise in the east.

The number of lines you have counted to here,

Partakes in the world that has always been near.

And I went all in! The line about homophones and beasts I was convinced would be connected to Old Stinker, our local werewolf.

From here, it didn’t take much to connect the other clues to fit. Silver partakes – silver bullets to kill it. ‘Double L’ seemed to crop up a lot, so that was obviously meaning lupus lupus (Latin for wolf). And the penultimate sun…well this clue was posted just before Easter Sunday, which is determined by the full moon. And the penultimate part of course, again, referred to the moon as it is ‘what comes before’ the sun. The seven lines is a very prominent number for Easter (7 words of Jesus), finally with a total of eight lines standing for resurrection.

Easter Sunday. It would all happen. Whatever that ‘all’ was. I’d nailed it…surely?

And then, the Ginger Fellowship (which is what I now call them…it is a gang for red-headed folk only), responded to ONLY ME! Hurrah!

Sam told me that nobody likes a smart-arse, but I didn’t care. I was busy reveling in my own intelligence, scoffing at some of the sweet, naive suggestions made by others. Oh how silly they would feel when all was revealed!

And yet, everyone else (and I mean EVERYONE) who had taken time to get involved was banging on about the tales of the Seven Alleys. Which apparently is a collection of folklore tales and ghost stories from my own area of Hull. Some stories were even connected to a place mere metres from my childhood home and also my high school.

Yet I’d never bloody heard of any of them. Not even a sniff of what they were on about. So all these hundreds of people were clearly wrong. I mean, the Fellowship had contacted me, not them. They told me it was marvellous deduction and would be investigating right away.

They couldn’t be humouring me, could they? How had I managed to fit the clues to my theory? *Gasp* I hadn’t just created fake news had I?

Whilst I mulled over my rapidly diminishing code-cracking skills, another clue unfolded. A ‘ghostly’ horse and carriage was seen wandering the streets in East Hull and turned up at a woman’s house. They delivered an ‘invitation’ that requested her presence at a place she’d been before (this turned out to be a local park) to unlock the secrets of the Seven Alleys. 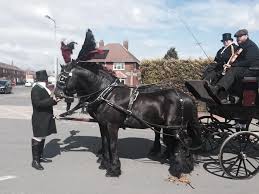 Well, I wasn’t too disheartened as it was clear (to me anyway) that it was a publicity stunt, mainly due to the fact that this ‘ancient’ invite had a convenient web address on the bottom…

My newest theory was confirmed by my friend, who messaged me to say her mum had received a letter, warning residents of an upcoming show for City of Culture (she backs on to the park).

Anyway, long (loooooong) story slightly less long, on Wednesday we attended the first ‘investigation’ into the Alley tales. Crowding into the park after sunset, the gates were locked and ominous smoke billowed across the grassland.

Suddenly, a voice (from a speaker, not the ether) reminded us that spirits do not like flashlight and to look with our senses. Everyone immediately got their phones out.

It was at this point we saw several figures in the distance, dressed fully in black and beginning to take slow steps towards us. Some of the youth contingent took this as an opportunity to show the world how hard they were. A fight could be on the horizon.

The residents’ letter had definitely said family friendly, not frenzy…

The sound of hooves blasted out over the speakers and the crowd surged to the right. Being of a very short stature, I had to rely on Sam to tell me that the carriage had arrived. This heralded the start of the show (the figures were still slowing gaining ground) and we were encouraged to follow the horses through the relative darkness and smoke.

Which we did without question. I mean, seriously in this day and age! Several hundred members of the public had turned up to congregate in the dark for no real known reason on the word of some two-bit ‘experts’. And I was one of them.

The figures we passed turned and loomed towards us with gaslights as we thread through the trees. Then a bell started to toll and, as one person referred to them, the cast of Peaky Blinders turned up with some flaming torches. 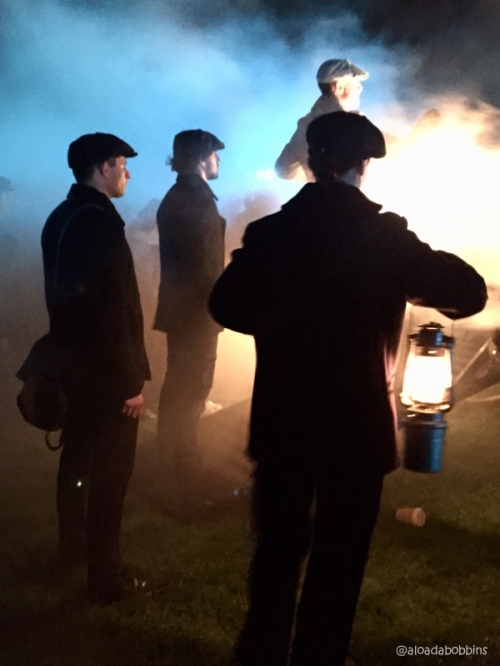 It was all starting to feel a bit Wicker Man…

But in all honesty, we were safe. For the next hour we watched as the stories of the Seven Alleys were told through performance and poetry, fireworks and foam bubbles, all delivered from mobile stages that wound through the crowd. 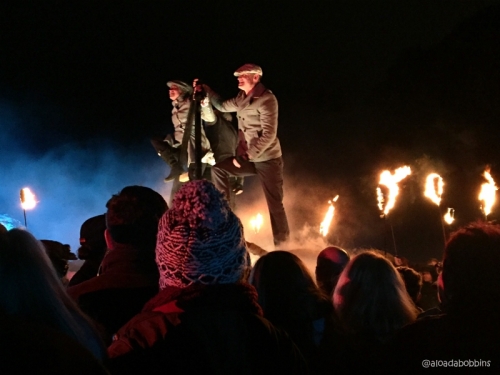 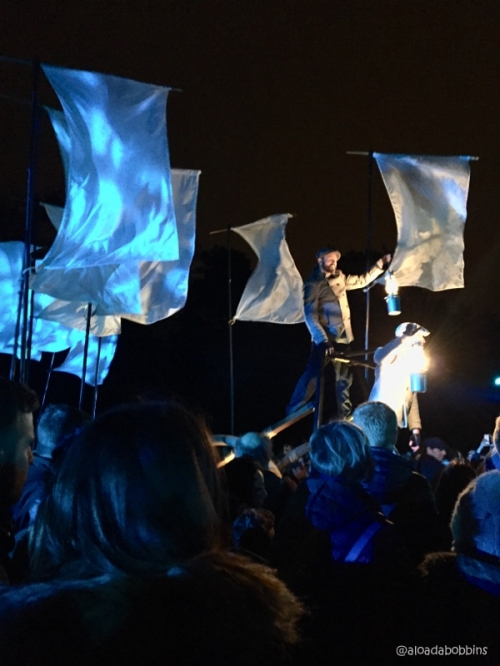 It was really quite good fun, especially as it was free. And the build up made sense, as it hadn’t been widely advertised – a ‘secret’ performance for those who took the time to look for it.

The foam machine blew out pieces of paper, that we were asked to grab. Another riddle for another event? Who knows…

But as good as it was, had it really solved the original mystery?

One child said as we were leaving,

They were only saying what we were all thinking!

Therefore, I feel it is my duty to put things right. In part 2, I’ll actually share each of the folklore tales (and possibly some others) from the Seven Alleys.

Because everyone loves an urban myth or seven!

IMAGE CREDITS: Mine plus via Wikipedia, Yelp, Twitter and Hull Daily Mail

7 thoughts on “Are you brave enough to enter the Alleys? (Part 1)”