Hello everyone! I did say at the end of last year that I would continue with these compilation posts, so I thought it was well overdue that I’ve left it this long and we’re already half way through March!

Therefore, without further ado, the ninth edition is actually the first Web of Wonder of 2017, featuring an entire collection of YouTube gems that have tickled my fancy. As I’ve said before, there are some incredibly talented people out there!

If you’re familiar with the game Assassin’s Creed (and the subsequent movie adaptation), you’ll know that leaping across buildings, in a parkour style, is commonplace. And there’s no denying that graphics in games these days are ridiculously life like, with improvements being made all the time.

However, this artist (Serene Teh) scaled back the detail and recreated a scene from the game that is reminiscent of old-school flip book art. Including the iconic ‘Leap of Faith’ from the game play, the way it has been put together with various pieces of paper unfolding is so clever.

Even if you don’t know the game, watch and be blown away by how it all pans out.

I love a good parody or humourous slant on a known entity and this is as daft as it gets. This parrot, who fancies itself as a Rhianna tribute act, has been cleverly edited into a video featuring the artist on the Eminem track ‘Monster’. It’s pure, stupid, genius. Made me chuckle anyway!

MAN IN THE MIRROR

This interpretive dance routine appeared on the show ‘So You Think You Can Dance?’ and is just beautiful. I love emotive dance routines and the way these dancers seamlessly move and glide together is fabulous.

However, when I looked for the video clip to feature in WoW#9, I found this one instead which has a voice over created Angel Ortiz. I found his words worked especially well with the original piece, with a sentiment that perhaps more of us should live by.

HOW TO PLAY A MAGICAL HORN

Creating music is something I’ve always admired. Playing an instrument is one thing but having the ability of composing an original piece that doesn’t sound like a child bashing an out of tune piano is quite a feat.

This guy goes one step further and creates music from art! Inspired by another artist, Savant, who composes in a similar way, Andrew Huang drew a unicorn and ‘played it‘.

And moreover, it works! Sounding like it’s stepped straight out of an Eighties fantasy adventure video game, the midi-corn’s song perfectly fits its whimsical nature. The accompanying video explains how he did it and is pretty interesting in itself.

I’m frequently astounded by the abilities of the human body and this video is no exception. This group of gymnasts, who delightfully look like they’ve stepped into a box of melted Crayola, are incredible.

It starts a little slow but watch to the end as there are quite a few ‘OMG’, hand over mouth moments! From skipping with a child…as the rope, to stomach churning leaps into the ether, it’s quite a watch.

I’ve watched Casey Neistat for a while. Once a daily vlogger, and one of the fastest growing YouTubers, he has filmed some awesome footage via drones that he often flies whilst zipping around New York on his boosted board. 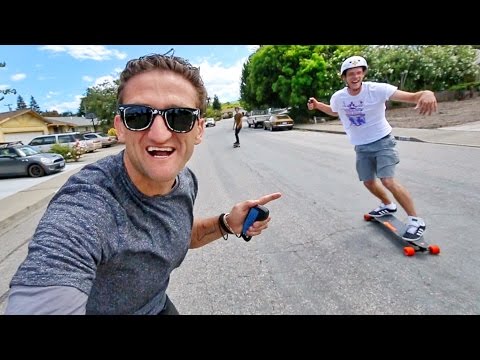 But this video is quite different. Inspiring to watch, it gives a message to basically get out there and try something. The practicalities for everyday folk may not seem achievable yet as creators, whether as bloggers, vloggers, artists, dancers, songwriters and more, we are all trying to put our little mark on the world. And these days, YouTube is one of the main platforms for getting it noticed.

I only have to talk to the children at school to know that for their generation, YouTubers are the new movie stars. Granted, there is a lot of rubbish floating around the video vaults (I’d put my own little ventures in this category) but there’s equally an immense amount of talent.

So to come full circle from the start of this post, watch ‘Do What You Can’t’, which I feel is somewhere between a speech by Steve Jobs and the Baz Luhrmann spoken word track (The Suncreen Song), that was based on an essay by columnist Mary Schmich.