Yes, tomorrow is the last day of October, the night the veil between this world and the next is at its thinnest – Hallowe’en! Also known as Samhain (pronounced by some as Sow-en – you see, now the title makes complete sense!) it is officially my favourite celebration of the entire year – I get far more excited over this than Christmas. 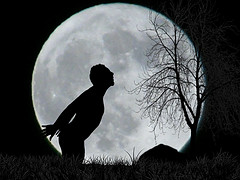 Why? Absolutely no idea! I’m not sure whether it’s scooping out all that delightful grot from inside a pumpkin or dressing up to look like an idiot, but I love it. Although Britain is slowly upping its game when it comes to this festival, I’m determined one year to experience it in the US…and then maybe stick around for Thanksgiving too. Please inbox me with your invites…

But what makes a great Hallowe’en? And what’s behind the certain traditions? Here’s my look at what I consider the four most important elements.

The Decor
Carving pumpkins is synonymous with Hallowe’en. These glowing protectors sit outside many a household in October with more elaborate designs being thought of each year. My adventure into the world of gourd art is fairly new (and not spectacular), having only taken it up a few years ago. As a child, we always carved a turnip – I thought nothing of it at the time, but years later thought it must be because we couldn’t afford a pumpkin! Or at least it was an American thing and pumpkins didn’t exist this side of the Atlantic 30 years ago…

In fact, my mum was just being traditional. You see, lantern carving isn’t American at all – the Irish introduced the concept when many emigrated ‘en masse’, especially during the potato famine of 1846. Turnips, which had always been used to ward off evil spirits back home, were not easily come by in their new country, so they used what they could lay their hands on. It seems these colourful, cheerful spheres were more than willing!

I’ll admit, this is as far as we go in the decoration category but if we lived across the Pond, I’d be wanting a full, haunted house experience, beginning the preparations in January! If you’ve not seen The American Scream, check it out. This documentary follows three families, who are crazily invested in creating haunted houses for the neighbourhood – the amount of planning, money and time that goes into it is insane, but very cool!

The Costume
Costumes, whether scary, random or sexy, are as much part of Hallowe’en now as pumpkins and sweets. Have you ever wondered why people dress-up?

The earliest recorded costumes, date back as far as 1585 in Britain – the practice, known as mumming or guising was traditionally perceived as a protection. Children and the poor would go ‘souling’ – singing prayers for the dead in exchange for food (the beginnings of trick or treat). But If you had to leave the house on All Hallows’ Eve, the dead would not recognise you (and therefore not bother you) if you wore a mask. And so it began…

America didn’t adopt the tradition until the 1911, when parades depicting evil creatures or folklore were the norm. Nowadays, anything goes! My costumes, which are generally last minute, seem to centre around my hair. Having so much of the stuff has allowed me to twist it into the focal point of the design. From a possessed doll, to a head of ‘hairy’ snakes as Medusa and last year’s (my favorite!) a very large ‘spider’ made from my locks!

I’ve nothing organised yet this year, so I may go extremely understated and just dress my fingers… 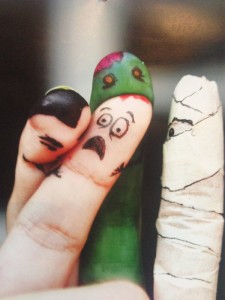 In all honesty, I’d quite like to be this cat…

The Entertainment
Back-to-back horror fest! You can’t beat a good horror film in my opinion and each October 31st, we indulge in a marathon mixture of classics and… decidedly ridiculous films from the genre. We generally begin with the cheesy, laugh out loud offerings – Sharknado (yes, a tornado filled with killer sharks…and Tara Reid), Killer Clowns from Outer Space (I remember a lot of ice-cream…) and if Sam gets his way, Birdemic, are just some of the titles.

We always work up to a ‘good’ horror, which these days is increasingly harder to find unless you like excessive gore. Some of my favourites from past years are:

And for the kids (big and small!):

Did you know that The Devil’s Castle, by film pioneer Georges Méliès, is considered the first horror movie ever made (1896)?

The Activity
If you can’t (or won’t!) stay in a ‘real’ haunted house overnight, how about a attending a scream event? More intense than taking a sedate tour of haunted locations, I can honestly say I have never been so terrified in my life! Along with zombie runs and ‘torture’ escape rooms, these seasonal experiences are becoming more and more popular.

We attended Yorkshire Scare Grounds and whilst Sam found it hilarious (mainly due to my reaction!) I was almost given pride of place on the ‘Pant wetters’ wall‘!

We had to avert capture by rabid humans, leg it across wasteland in pitch darkness and try to find our way through a maze of chicken wire, all the while having smoke, flashing lights and screaming actors thrust in our face. How someone didn’t get punched is beyond me. It was all kinds of brilliant, even if I did have no voice or mascara left by the end of it!

Themes generally change every year, so you’ll not be disappointed…if you dare return of course!

So what will you be doing for Hallowe’en? Do you love it or loathe it? Whatever you do, enjoy! 🙂

Image Credits: My own plus here.