Product reviews? That’s not something I usually venture into, is it?

However, when the lovely Betty from Beets Blu contacted me and asked if I’d like a set of their smart scales in return for an honest review on Amazon, I was happy to oblige. And whilst I wasn’t obligated to share the review on my blog, I thought I would as I know there are several of you that follow who are currently on a weight loss / health regime, so it may be of interest. 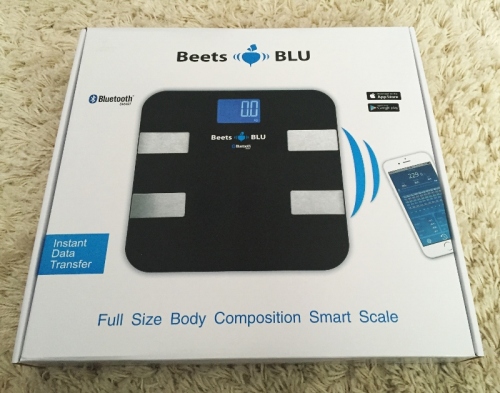 If you’re not, well…scales are always handy to check you won’t be going over your luggage allowance, right? 😉

I’ve been in possession of these scales for around two months now and I can honestly say I’m very impressed, using them on a daily basis.

Smart scales though? Didn’t have a clue what they were – was it just marketing speak for looking good? Were they cleverer than the average weight recorder?

What it actually meant was they were more specific than regular scales. Able to track your overall weight, they also read your fat, muscle density and BMI by sending a tiny electrical (unnoticed) charge though your body when you step on them.

Set-up was incredibly easy with straightforward instructions (included) to take you through the initial calibration process (simply switching on and standing on / off within a specific time period to register the system). However, in order to track your weight / BMI etc, you will need to download the free Beets Blu SmartScale app (available on both iOS and Android) and the instructions don’t necessarily make this immediately clear. There are QR code links on the box to the relevant app stores, but some people may not realise what these are used for. Without the app, they still function  as regular scales.

Once the calibration / app download is complete (requiring less than five minutes of your time), you simply need to have the app open whilst standing on them for a few seconds (ensure each foot touches both metal strips for a clear reading).

Yes. The app will SHOUT OUT your statistics! Hopefully, you’ll be well on your way to congratulating yourself for all those early morning runs with such affirmations as, ‘Whoo! You are looking F.I.T. today’.*

Unfortunately in my case, the seismic early warning alarm* kicks in and I’m left cursing cupcakes the world over for ever flaunting their frilly icing in my direction!

This is not the full screen shot – I’m not about to start sharing my weight and although I’m improving, you can see it’s slow!

* Okay…so they don’t really shout at you and say those things. But the app does verbalise your measurements and certainly acts as an incentive to sort out your eating habits once and for all (you can of course put it on silent!).

As an iPhone / Apple Watch user, other plus points include the seamless update from the Beets Blu app to the Health function within iOS. And they do look the part too: ‘smart’ could easily describe the aesthetics, which are slimline and stylish. The black glass and metal design fits perfectly with modern day bathrooms.

The only negative I would have is the fact you must use them on a hard floor – no lino / vinyl can be used (which is present in many people’s bathrooms) unless you re-calibrate each use. We don’t have that issue personally but it does mean I can’t move them elsewhere unless I use a stone slab or similar to stand them on.

That said, it wouldn’t deter me from recommending them. So, if you’re in the market for a new pair of weight recorders, you can find links to them on Amazon below, plus a link to the official Beets Blu website for further details.

Image Credits: My own