Following our little adventure in Venice, I’d booked us a train to take us to Rome, as I was determined to play an Audrey Hepburn ‘princess’ in my own version of Roman Holiday!

However, it seemed I hadn’t booked us on the the double-decker speedy rail transport – no, ours trundled up to the platform in more of an Ivor the Engine fashion (just not as quaint!) After a (very) leisurely ride through the Italian countryside, we arrived 6 hours later… 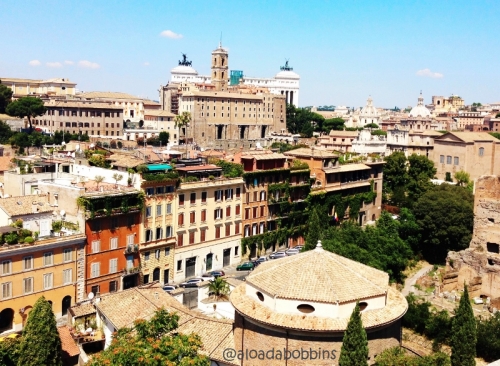 This was my second trip to Rome and the first time well…let’s just say we didn’t part as friends. Admittedly, I had been on a day trip that began in Sorrento. Hours on a hot coach, only to be jostled around the city at breakneck speed, without even a glimpse of the Colosseum did not put the capital in a good light. But I decided it was time to forgive and forget and I’m extremely glad I did! My top 3 tips for navigating Rome are:

Seriously, there are so many monuments and places of interest crammed into a tiny space that you stumble across them around every corner. Our first day we clocked up nearly 12 miles, spending the entire day out, ambling from one sightseeing opportunity to another. It never felt like we’d walked so far as we took it at out own pace and avoided the crowds when we wanted to. 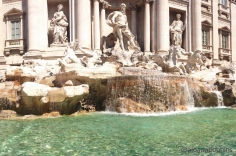 DO drink the water.

There are water fountains (Nasoni – meaning ‘Big Noses’) every few hundred feet. It’s perfectly safe to drink and saves you loads of money. Just carry your own water bottle around with you and refill as you go!

Most people visit the Colosseum first and stand for ages in long queues – not something you want in the Italian heat. I read a little tip before going that told us to purchase tickets at the Palatine Hill entrance and work essentially backwards. More shade and an easier route, plus an exit only gate that comes out directly opposite the Colosseum seemed a no-brainer…and it totally worked. Queues, crowds and searing heat avoided! You can read more here.

As sightseeing goes, I felt places such as the Trevi Fountain and the Spanish steps were a little ‘meh’ and over-rated. However, by far my favourite place (even pipping the Colosseum) was the Pantheon. 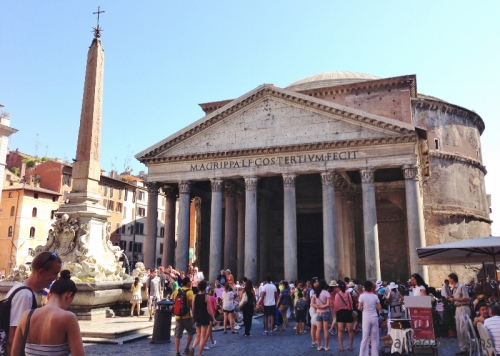 The present building was commissioned by Hadrian around 126 AD, with the roof being a dome made of concrete, surrounding a central opening called the oculus. Amazingly, it remains the world’s largest, un-reinforced concrete dome some 2000 years later!

I’m not sure what I liked the most about the Pantheon – the quiet (despite the crowds, it’s a church so whispering is encouraged!), the appearance or just comprehending the technical feat of engineering to construct the ceiling. 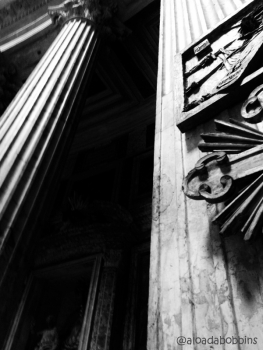 So that was our three night whirlwind trip to Rome. I may not have jumped on a Vespa with Gregory Peck but our Roman Holiday saw me fall in love with the Eternal City like I should have the first time. 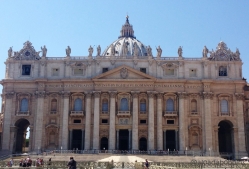 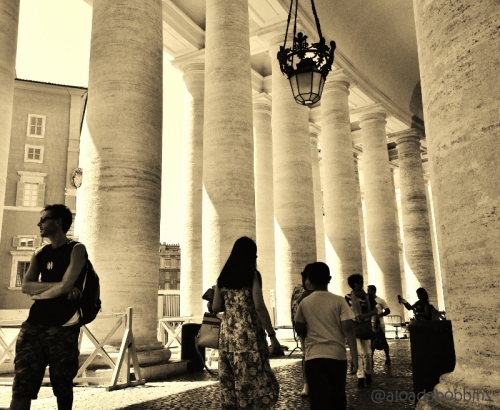 One last thing…the Calendar Romano (or ‘hot priest’ calendar – Oh, I feel so wrong for even typing that!). These are available for sale all over Rome but they’re in abundance around the Vatican. 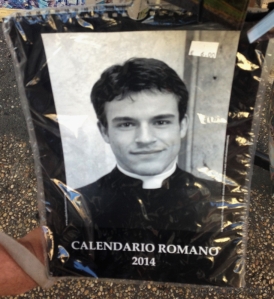 Whilst I can’t deny that it was full of good looking and genuine men of the cloth, isn’t it a little…sinful, given the nature of their role? You know, ‘Thou shalt  not covet a priest’ or something? Hmmm…

Image Credits: All my own so please be sweet and ask before sharing. 🙂

19 thoughts on “Alphabet of Travel Snaps: R is for…”