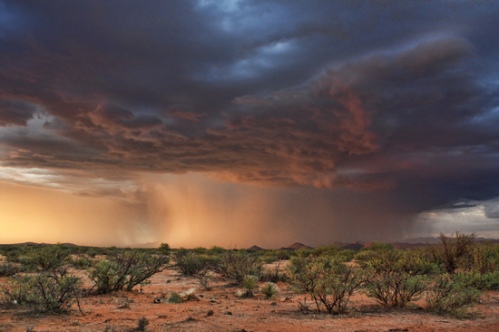 Clouds rumbled overhead, heralding the arrival of rain. The first drops met the ground sporadically, evaporating on the scorched earth, yet soon began to fall with more urgency, each grounded drip attracted to another like a magnet. They quickly joined forces, grouping to form rivulets, as they forged an unrelenting path through the desert sand.

Spurred on by the legions of droplets rushing to join from above, the liquid fingers spread outwards, searching for cracks to explore. Downwards they groped, caressing the untouched rock, probing further. Once the route had been scouted, ahead of the torrent, the eager surge asserted control, breaking through into…

For a moment, the fluid was once again suspended in air, free-falling and cascading, finally grounded for a second time, pooling wide and deep. The resulting splash echoed across the cavern until it ebbed into silence, save for a rhythmic drip that became less frequent as the minutes passed. Above, the deluge had abated and moved on, unaware of the repercussions it had triggered beneath.

A returning stillness, that had enveloped this underground hollow for years, was short-lived: ghostly vapours spiralled upwards from heated waters, as a ripple took form on the virgin lake. Multiple followed, faster, until the entire surface vibrated like a silent drum-roll with the promise of what was to come. A sudden, sharp intake of breath was the cymbal breaking both waters and an expectant hush.

Tilting its head upwards, a smile spread across a serene face and ancient senses drank in the surroundings, unhindered by eyes that remained closed. It rose further, allowing wings to unfurl and shake themselves free of moisture, whilst all around, others continued the same routine until almost thirty creatures stood waist deep in the freshly formed pool.

The first to emerge snapped open liquid amber eyes and in a single movement, the whole collective flew upwards towards the light, circling to escape.

The Lacunae were reborn…

I wrote this with the intention of it being a prologue for a science-fiction tale that I’ve been dabbling around with for a little while. There’s more, mainly back story introducing the MCs so far, but I thought I’d throw this out there and see what you thought. I’d love your feedback, good or bad! And of course, thanks for reading!

Credits: All words copyright of Aloada Bobbins. Image from dailykos.com.