So it seems it isn’t just me that fondly remembers (and still watches) the fabulous array of cartoons from the 80s and early 90s! My first trip down memory lane seemed to bring back ‘aloada’ happy memories for many of you, therefore I thought you’d like some more. 🙂

This flashback concentrates on what appeared to be the other dominant force for animation of the decade; Stop-motion. 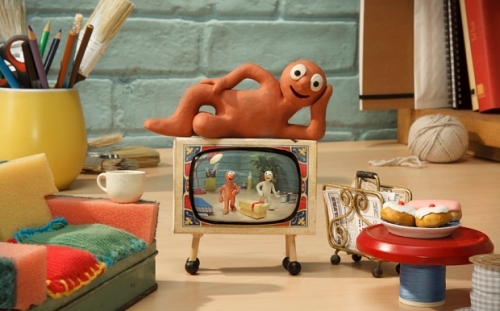 The technique, (where objects are physically moved a little at a time, photographed and then played back to form a moving image) was used for more than kids’ entertainment – both music videos and advertising campaigns utilised it before CGI weighed in and took over.

Tagging along for the ride are the puppets – you can’t do a nostalgia post about 80’s TV without a shout-out to Jim Henson and the F.A.B Tracy family! Not only do I have great memories of the shows themselves but I’ve continued to have an admiration for the methods used.

Despite CGI being mind-blowingly awesome, it’s nice to see actual props and animatronics being used these days, as they can give weight and ground a scene – although I’m sure one day, you wont be able to tell the difference from CGI (it’s pretty close already!)

But enough about the intricacies of special effects, let’s check out the list. Have I missed any of your favourites? Let me know what you think of the choices!

Who? You? Barney’s there too?

The role call for the fire department in the village of Trumpton will be forever etched on my brain! Along with its sister show, Camberwick Green, these stop-motion villagers filled my lunchtimes with their tales of ordinary life. Whether it was Windy Miller, stoically maintaining his ancient mill or a cat that needed rescuing from up a tree, everything was happily resolved by the end of the show and in the case of Trumpton, you were played out by the fire brigade band. It was delightful!

Apparently, there was a third show called Chigley (although I’d never heard of it) and all three were modelled on real villages. It was quintessentially British – I’m sure Trumpton’s fire brigade could have gone on to form the Home Guard!

They may have only made 13 episodes, but Bagpuss has stayed in the hearts of many a child of the 80s. The stripey cat, that was loved so much by his owner Emily, came to life at night, along with his friends: Professor Yaffle, the woodpecker, Madeleine the ragdoll and the very helpful / annoying mice!

I wanted to be Emily and have a magical shop to venture into and watch what all the toys got up to after dark. Of course, Emily never saw any of these antics – they happened after she left. And when Bagpuss went to sleep, all his friends went to sleep too, just in time to avoid being caught moving!

One huge TRIP down memory lane…

Most people have heard of The Magic Roundabout – a blast of crazy colour and quirkiness with the likes of Dougal, Brian the Snail and of course, Zebedee bouncing in and out. It was all a bit trippy…

But what about Chorlton, the happiness dragon (and the Wheelies)? This was my favourite injection of weird and I have absolutely no idea why! I remember nothing of the storylines but do recall endless debates at school trying to sing the theme tune – that NOBODY could remember. It was as if we’d been brain wiped after watching it. This had far more hallucinogenic properties than that lot on the carousel – I mean, just look at that witch head on wheels! Enough to give you nightmares….HA, HA, HA, HA! 😉 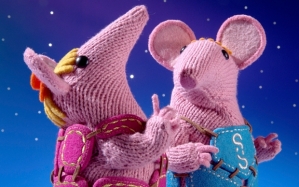 I was into the Moomins! These, hippo-like fairytale creatures were based on the Moomin stories by Tove Janssen. Surprisingly, this stop-motion version was criticised for being ‘too dark’ for a younger audience – maybe that’s what appealed to me! Although, I found them all kinds of cute. 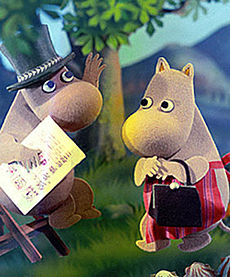 They’ve been animated many times, even having an anime style re-creation for the Japanese audience, and (*does an excited little dance*) there’s a theme park in Finland devoted to them. You know where I want to go in the near future…

From darkest Peru to Wimbledon, via the moon…

Forget the film from 2014 (it was alright…), the ‘real’ Paddington belonged to my childhood. The 3D bear, with his little suitcase and marmalade sandwiches, toddled around in front of his sketched, animated background and was adorable! 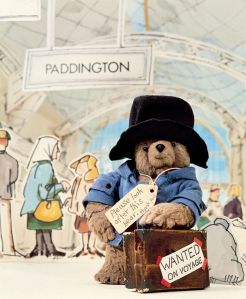 I had one, complete with wellies and duffle coat and pretty much every teddy I owned would come with a warning of ‘please look after this bear’!

From furry bears to furry…Flumps. They were knitted, fluffy goodness-knows-what, but they were cute and Pootle rocked! 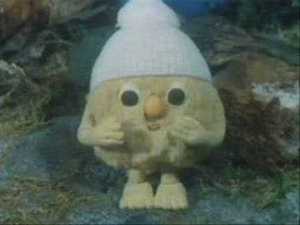 Next stop, Button Moon! I followed Mr. Spoon regularly (not literally, it’s the theme tune for those who don’t know!) and all the adventures of his family made of kitchen utensils. I reckon I’ve made half his offspring in junk modelling sessions at school many times…

And finally, the ultimate eco-warriors – those underground, over-ground Wombles were free to clear up the mess on Wimbledon Common, upcycling and re-purposing before there was a Hipster in sight!

There are soooo many more I could mention; The Trapdoor, Stoppit and TidyUp, Adventures of Morph are just a few more examples – we were so spoilt!

On to the puppet masters. Gerry Anderson had been entertaining us with ‘Supermarionation‘ for years before I was even born but thanks to the popularity, repeats meant that Thunderbirds and the famous Tracy Island would be built in a Blue Peter style, enthusiastic way by generations to come.

Although I loved Lady Penelope (for years I thought she was the same ‘person’ as Penelope Pittstop), my personal favourite was Stingraaaaay, Stingray (with that minx, Aqua Marina!) 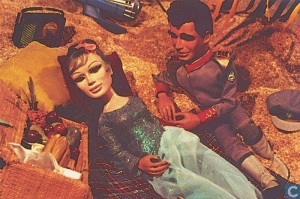 I was also quite a fan of announcing (to anyone that would listen) that, ‘This is the voice of the Mysterons!’ That was, until the Terrahawks came along… 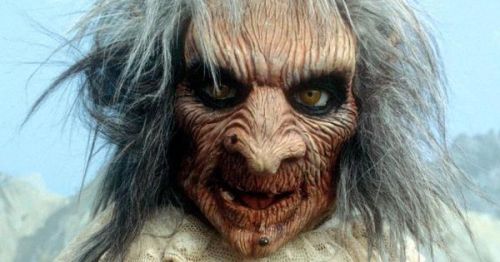 The sci-fi element captured my interest, the fact that Zelda was all kinds of creepy and the end titles – a game of noughts and crosses – were the highlights for me. Who would win? Who would cheat? (US audiences apparently missed out on this game, it was designed for us Brits only…sorry!)

But the ultimate puppet master, was of course the late, great Jim Henson.

Not only did he direct two of my favourite childhood films, The Dark Crystal and Labyrinth, but his characters entertained adults and children alike, making for great family viewing.

Fraggle Rock was by far my favourite ( I swear every time I wore my hair in high bunches, my mum would say I looked like Red!) but I loved The Muppets too. You can keep that huge yellow bird though – never was a fan.

In my late teens, I was lucky enough (through a friend) to get a behind the scenes tour of the (then) current version of The Muppets in LA. Completely fascinating, seeing all the sets built on stilts so that the puppeteers could walk below and work their magic. I also had lunch with Penn and Teller (the special guests that week). It was before I knew who they were, so I kind of found the silent treatment a little rude…!

Check out my frizzy hair! 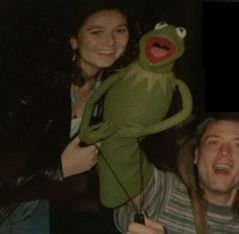 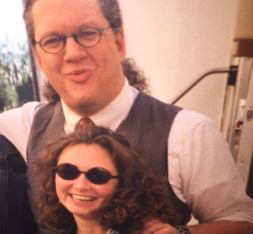 Honourable mentions must go to POB – the little thing that upset parents nationawide with his spitting habits, as their kids tried to recreate writing on windows, Sooty (it was all about Sweep) and Bodger and Badger. I defy anyone who watched it to make mashed potato without it entering your head! 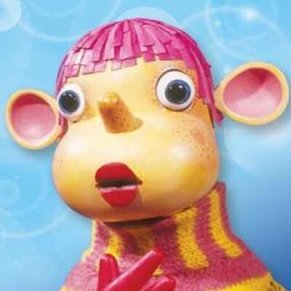 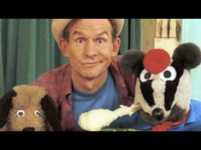 For more nostalgia, take a look at Steve Says’ post here – he even renamed my blog!