I’m terrible for having sudden whims and fancies that I like to put into immediate action, usually much to the annoyance of S. Friday saw such an event as we were on a drive to a sporting final out in the country and I suddenly spotted a ‘Pick Your Own‘ strawberry patch.

A big grin signalled that yes, I would like to detour into said field right this minute! Despite the audible sigh, S obliged and abruptly turned into the parking area. Of course, it couldn’t be that simple could it? We had no change on us (I’m also awful for only ever carrying plastic) and this field was clearly living in the Dark Ages and had no power supply for a cash machine 😉 However, after a bit of back and forth to a local garage, we had money and a basket and off we went. 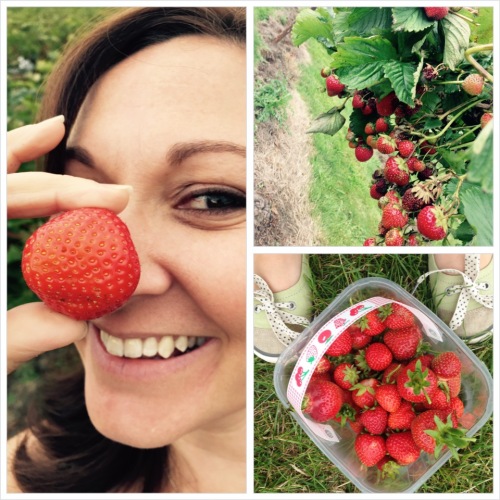 I was loving it! Just the smell alone was wonderful, but there’s something very calming about pottering around a field and foraging. After about 40 minutes, we had around a kilo of strawberries (some right hefty specimens too!) of differing varieties for a bargain price.

I do like strawberries but they’re not something I buy generally as they usually get wasted. So having a kilo to use up because of my impromptu madness meant I needed to find some suitable recipes. I’ve been seeing a lot of Eton Mess recipes recently (they always seem to be rolled out as a summer staple) and a few for a cheesecake variation were looking enticing! Cheesecake at one point was my ‘go to’ dessert when out for a meal, though I think I over did the consumption and my appetite for it was lost. However, I’ve recently become reacquainted with its creamy loveliness, so announced to S that this is what he could expect as dessert when he got home…

‘Oohhh, hmmmm…I’m not sure your culinary skills are up to making cheesecake yet.’

Oh really?! Right then, challenge accepted mister! That said, I did opt for a no bake version – I’ll tackle one in the oven next time perhaps!

I amalgamated a couple of recipes I found and even impressed myself by making strawberry coulis to pour over the top! I was on a roll but I still had a shed load of strawberries to find a use for. So what did I do? Decided I’d make jam. Naturally, I wanted to make it quickly and was pleased to find some 30-minute recipes, that didn’t require pectin (I didn’t have it, didn’t actually know what it was and wasn’t about to go down to the shops to hunt it!)

The end result of around an hour in the kitchen (not counting the cheesecake chilling time) was one dessert, one pot of jam and enough coulis left over to drizzle on some pancakes at breakfast! In fact, I even had some strawberries left to make a large jug of Pimms to wash it all down with! 😀

Goodness, I felt so quintessentially British, I was ready run down to my nearest Women’s Institute whilst singing a verse of Jerusalem and bust out a calendar (no pun intended!). Too much with the stereotype? Okay, sorry…

Full disclosure on the jam…it looks and tastes the part but is incredibly difficult to spread. Perhaps this was something I did wrong or the lack of pectin…I’m sure some seasoned jam makers will put me straight! However, if you’d like to try making some in 30 minutes (it works for most fruit apparently) you can find the recipe here on pinchofcinnamon.com. I just reduced the quantities to fit my needs.

The cheesecake on the other hand was amazing! *Stops blowing own trumpet* Plus it was super simple for something that looks fairly elaborate. Achievement unlocked… 😉

For the strawberry coulis:

Method:
Grease and line your tin. Crush all the biscuits into a fine breadcrumb consistency. (Most recipes say use a food processor but where’s the fun in that?! Get the rolling pin out!) Mix well with the softened butter and flatten as evenly as possible into base of tin. Pop in the fridge whilst preparing the filling.

Whisk together both cheeses, the icing sugar, lemon juice and vanilla extract. In a separate bowl, whip the double cream until it creates peaks. Fold it into the cheese mixture, along with the lemon zest. Add this to the biscuit base, spreading evenly. Chill again for 4-6 hours.

To make the coulis, bring the sugar and water to the boil, then add the strawberries and cook for a further 2-3 minutes until soft. Next, blitz it all in a blender (any remaining coulis will keep for 2-3 days in the fridge). Allow it to cool before pouring it over the cheesecake (that you’ve removed from the fridge and stripped of its tin and lining!), finally adding the crushed meringue and strawberries to decorate.

Enjoy with a glass of Pimms, a cup of tea or whatever you fancy. Just be warned, you wont be enjoying it for long because everyone will want a piece! Although, if you have better willpower than we do, it should keep in the fridge for 3 days. 🙂

7 thoughts on “Messing about with a horde of strawbs!”