This week’s Void of Rainbows is a special post and one where I can’t claim credit for all the images. Today is my grandfather’s 96th birthday, so I thought I’d share some of my favourite images of him from his youth

I’ve always loved old portrait photographs and the feelings they evoke, but things I’ve found they have in common are the dour expressions of the subjects and their formal posing. However, the small collection I’ve shared (dating between the early 1930s and late 1940s) seem to have more life about them, being more candid, relaxed or fun. But perhaps I’m just biased as I know the personality in front of the lens! So here’s a brief history of my grandad, so you know who you’re looking at 🙂 …

Born just days after troops finally returned home following the end of WW1, it’s astounding to think how much he has seen the world change. Yet always embracing new ideas and technology, my G-Pa has never seemed like the pensioner he always has been within my lifetime. I certainly can’t call him a typical nonagenarian when he’s surfing the web on his iPad or playing Angry Birds!

After being badly burned in a fire as a baby, he went on to do some amateur modelling, often posing in costumes or as the main subject for his best friend who was a keen photographer (Miles is the man responsible for the images in the gallery). He was stationed in various places during WW2 within the RAF, repairing planes after bombing raids and helping to install and prepare airbases for allied US troops to occupy in southern England. It was here he was honoured to meet the Hollywood actor, James Stewart, who was stationed at the same base.

As the war ended, my grandfather was initially unable to celebrate, believing he was being sent overseas to Burma. However, once he returned from leave granted for V.E. Day, he discovered it was a mistake and was promptly sent back to London, having been discharged for his length of service. He went on to take a job with the now defunct Mi7 (I tell everyone he trained spies…I’d like to think he was a UK Shield Agent or something!) until a change in family circumstances sent him back north to where he was born. 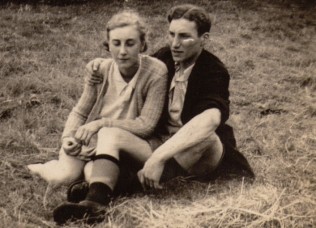 Even after retirement, he remained active, biking everywhere and keeping fitter than most 30 year olds with 100 press-ups a day…right up until his legs finally told him enough was enough three years ago! Now, with the help of his iPad, he continues to keep his mind active and is passionate about history. He is fascinated by digital photography and the images it can create, often poring over them for hours, pinching and zooming for a closer look.

I’d like to think this post celebrates not only turning another year older, but also our place in history, however small, the achievements in technology and how that has shaped us as humans and of course all the armed forces around the world that have kept (and continue to keep) us safe.

So I hope you’ll join me in wishing my grandfather a wonderful birthday and remember that it’s the mindset that determines old age, not the number!

Image Credits: ‘Miles’ and my own…please be sweet and ask before sharing! 🙂